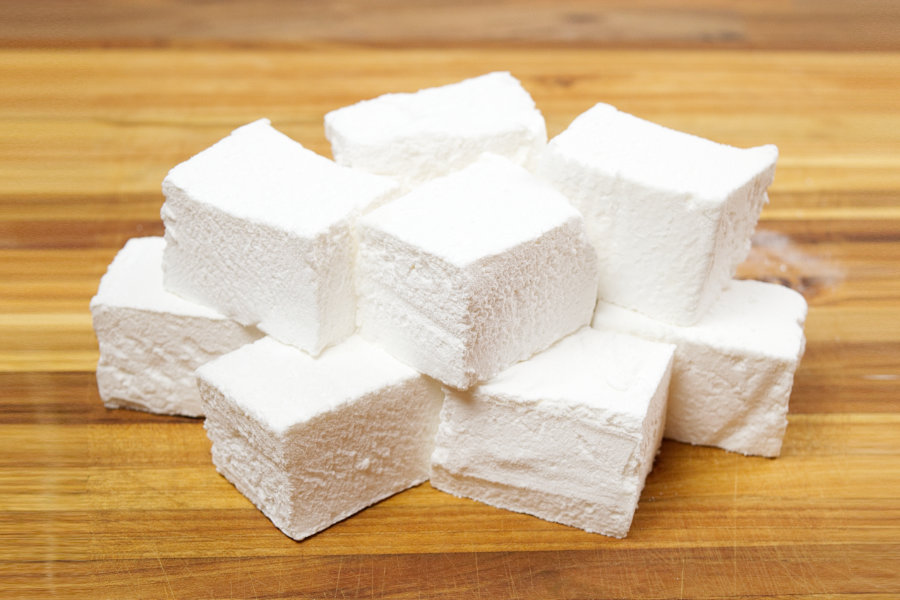 Homemade marshmallows are nothing like the pre-packaged kind, which have an artificial and almost metallic taste. Especially when using real vanilla, marshmallows made from scratch pack a richer decadent flavor. They are extremely easy to perk up with different flavor variations too; just whisk in a tablespoon of extract and your marshmallows will take on a whole new personality.

Classic vanilla is an all-time favorite.

For an intermediate or advanced baker, this recipe should be a piece of cake. But absolute novices who have never made a meringue before may find the task a bit daunting. This recipe is an Italian meringue-based marshmallow recipe. It begins by preparing an Italian meringue—the trickiest part. Whipping egg whites with very hot sugar forms the base of the marshmallow. Adding hot gelatin will stabilize the mixture as it cools until it becomes a spongy and gelatinous form. Properly stored in an airtight container, these marshmallows should last several weeks.

This recipe is derived from the superb book Patisserie by Christophe Felder, detailing this and hundreds of traditional French recipes. 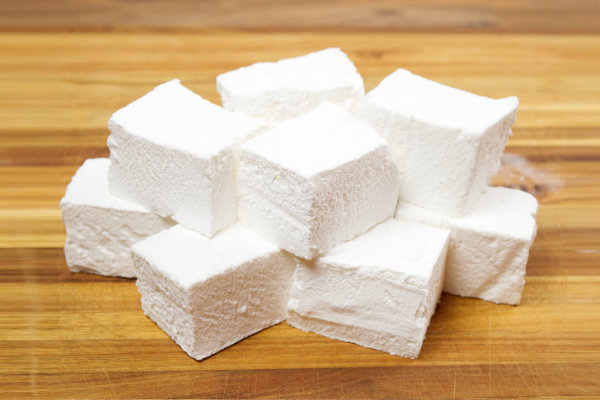 Bloom the gelatin in about 4 tablespoons of cold water. This is an important step to ensure the powder doesn't clump when it's added to the meringue. Cold water will allow the gelatin to slowly hydrate rather than swelling around clumps of dry powder.

Pour in all of the powdered gelatin and quickly whisk into the water so there are no lumps. Set this aside to use when the meringue is ready.

If using a vanilla bean, split the bean lengthwise and scrape the seeds.

Mix the seeds with about two tablespoons of hot liquor or water. Let this vanilla mixture infuse while you move on to other steps. Vanilla beans will add a more pronounced vanilla flavor and scent than dull vanilla extract.

Start preparing the Italian Meringue. These marshmallows are a meringue-based recipe, in which gelatin and an excess of sugar is added to frothy egg whites. Whipping this mixture vigorously for 10 minutes will incorporate a lot of air for ultra fluffy, light, squishy marshmallows.

Preparing the meringue requires you to heat the sugar while the egg whites are whipping. This is why a stand mixer is almost a necessity for this recipe. However a hand beater and some skillful timing will work as well.

Begin whipping the egg whites. Once the whisk is running, move on to heat the sugar.

Pour the sugar, syrup, and water into a saucepan. Set the burner to medium and allow the sugar mixture to heat without stirring. Let this continue heating until the sugar reaches 240°F (115°C).

Whip the egg whites until they reach soft peaks, which is the stage where drawing the whisk up forms peaks which fall back down into the mixture. They should be frothy and opaque with a lot of very tiny bubbles making up the foam.

Keep checking the sugar temperature while the whites are whipping. If the sugar reaches the correct temperature first, take the sauce pan off the heat. If the whites whip up to the desired stiffness first, set the stand mixer down to the lowest setting.

When both the egg whites and the sugar are ready, set the stand mixer to a medium setting, around 4.

Slowly drizzle the hot sugar into the bowl with the egg whites while the whisk is running.

This will begin to cook the egg whites and stabilize the protein structure as the whisk incorporates air. The bowl should be quite hot at this point. Leaving the whisk on a medium speed, continue whipping the marshmallow mixture while you prepare the gelatin and vanilla flavoring.

With the marshmallows whisking, return the saucepan to the heat, drop in the bloomed gelatin, and let it melt until it is fully liquid.

Slowly drizzle the melted gelatin into the meringue while the stand mixer continues to whip.

Continue whipping the mixture for about 10 minutes. The bowl should go from hot to warm, just above room temperature. It should be stiff like meringue but smooth enough to take the shape of whatever it's poured into.

Wipe the pan edges with oil. Dust the base of your pan with a 50/50 mixture of corn starch and confectioner's sugar. This will prevent the marshmallows from sticking.

Pour the marshmallow mixture into the oiled and dusted pan. Spread the marshmallow so that it completely fills the pan and is even on top. Then dust with more powder and cover with plastic wrap.

Allow the marshmallows to set for at least 4 hours, or overnight. While it sits, the gelatin will cool and stabilize, forming a very stable structure.

After several hours when the marshmallows feel very springy and completely cool to the touch, cut the edges away from the pan.

The marshmallows are extremely sticky at this point, so you will have to periodically clean any sticky residue from your knife using a wet paper towel. It also helps if you have a very long and very sharp knife.

Brush a bit of oil on each side before making your cuts. Slice the marshmallows into your desired sizes.

Toss the marshmallows into the powder to make sure the cut sides do not stick to anything. Dust off as much of the excess powder as possible.